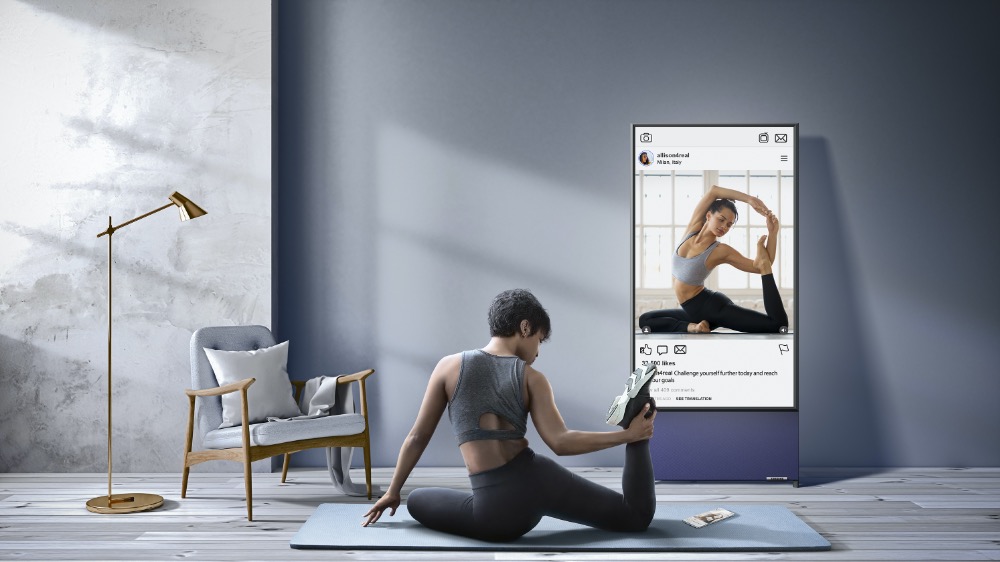 Samsung Electronics has announced the beginning of sales of televisions with rotating screens called The Sero.

The novelty is positioned as a solution designed specifically for the “mobile generation” – the ability to turn the screen to portrait mode allows you to more easily view content from mobile devices.

It is estimated that about 30% of the content for millenniums coming from smartphones and tablets, with their vertically oriented screens. The Sero will not only act as an external enlarged screen but will also avoid the appearance of blank black stripes at the edges of the screen, as is inevitable in the case of conventional TVs.

Naturally, the developers have maximized the convenience of connecting your mobile device to the TV. Availability of the Tap View function allows you to simply touch the frame of the TV to establish interaction between the devices. The Mobile Mirroring function will automatically turn the screen off, depending on the position of the smartphone screen. With support for AirPlay 2 technology, Apple devices can also use your TV.

The manufacturer also emphasizes the high image quality, achieved through 4K resolution and the use of Samsung QLED quantum dots. Highlights include the high sound quality of a 60W 4.1-channel audio system and an attractive TV design with an unusual easel-like stand.

The 43-inch novelty is already available and the recommended price is $ 1999. You can buy it on the company’s online store, as well as from Samsung partners.

It should be noted that by introducing The Sero, the company Samsung has not become a pioneer in creating vertically-oriented screens with “smart” technology. The first mass producer of such devices, called fitness mirrors, is the company Mirror, founded by former ballerina Brynn Putnam. These devices, which are not much different in size from conventional mirrors, allow you to turn any room into a gym for training purposes. In reality, what’s in front of us is a mirror with a screen built into it.

During a workout with a fitness mirror, users not only see their own image on the screen but also the image of the coach in front of them. At the same time, you can not only improve your exercise techniques but also gain access to all kinds of recommendations and additional features. Despite the cost of $1495 (plus a monthly subscription of $39), mirrors, which appeared on sale in the second half of 2018, were very popular with consumers. They became especially popular during the self-isolation period, with its closed fitness clubs. According to Forbes, Mirror’s revenue may reach $100 million in the near future if the company continues to grow its business.

However, unlike Mirror mirrors, The Sero is a more versatile device, not confined exclusively to fitness activities. This solution allows for a more convenient consumption of content from a mobile device. If you want, no one prevents you from using it for training, too, by running the appropriate application. The developers also offer an option to use it as a detail for the interior, while the TV acts as a large interactive picture or a kind of clock.